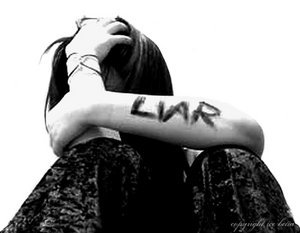 Did you know that I am a child abuser, a sexual voyeur, an insatiable slut, a homewrecking whore, a violent criminal, and that I make up words?

Well now, I didn’t either, until these beastly traits were pointed out to me in the forms of false accusations, self-serving fabrications, and sympathy-seeking stories that defy logic or truth. For instance, did you know that the allure of my feminine wiles seduced Gary away from his impenetrable, rock-solid, loving marriage? Imagine my own surprise at being told my sensuous trickery worked its magic from almost 300 miles away, since I wasn’t even living in the same town or even county when Gary’s ex filed for divorce, and I didn’t know either one of them existed yet. Yep, that’s how one version of this fairy tale goes. I didn’t say it was the most rational spin on the tale. It would be merely amusing if it wasn’t the version repeatedly spoon-fed to the children in hopes of turning them against me.

What are the possible, earth-shattering, dire consequences of another supposed adult admitting, even begrudgingly, that I am now a part of the kids’ lives and Gary’s life, and that I am actually (*gasp*) a good person? Let’s see, right off the top of my head, I can think of:

* The kids would finally have the freedom to love who they choose and not be made to feel guilty or wrong for enjoying my company or accepting my love (or their father’s).

* The adults in this situation could work together with more trust and less hostility, leading to better decisions about the kids, preferably based on the kids for a change instead of immature power struggles and maniacal ego-fluffing.

* It is impossible to release anger and bitterness that is petted and fed each and every day. The kids ultimately pay for this, and they deserve to be relieved of this burden. It isn’t theirs to shoulder, and it never was.

Yet, it would also mean:

* Admitting to lies and false accusations that are, frankly, criminal (lying in court and intentional false reports to DCF, just to name a few).

* Admitting to roles played and an equal share of responsibility for the divorce and for the kids’ ongoing pain. Foisting it all alternately onto me or onto Gary is convenient…but a lie.

* Facing the unnecessary pain and damage inflicted on the kids for no good reason whatsoever.

* Taking steps to reverse and attone for the poison dripped into the kids’ head like a steady I.V., each and every day.

So, am I holding my breath? Sadly, no. The course will likely stay on the same defeating, toxic, downright idiotic path it’s been on for years. Why doesn’t love for the kids prevail with people who are supposed to care for them?

I am endlessly trying to make sense of a world that has completely and unapologetically lost its mind.
View all posts by TheSmirkingCat →
This entry was posted in emotional immaturity, jealousy, kids, lies, never-ending lies. Bookmark the permalink.

20 Responses to What Would Happen?