Nine and a Half Lives

Posted on October 22, 2009 by TheSmirkingCat 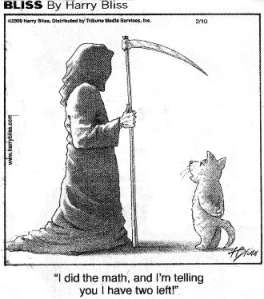 I took Tweetie for a check-up and to re-evaluate his medications yesterday, and when the vet walked into the exam room, he smiled as soon as he saw Tweetie.

My Tweetie wasn’t able to lift his head or move a paw just a few months ago, completely paralyzed and helpless. It was scary and heartbreaking. He spent his days under observation with the vet while I was at work, because he couldn’t be left alone. He couldn’t eat, bathe, get to the litter box, even so much as lift a leg to scratch an itch.

When the vet walked in yesterday, Tweetie was perched on the examination table with his paws draped over my arm, impatiently waiting to go home. A far cry from just a few months ago, he stood up, howled loudly so that everyone in earshot knew he was not pleased to be there, and then took a stroll on the table, scoping an ecape route before the dreaded thermometer could be produced.

The vet placed Tweetie on the floor to watch how he moved, and move he did! He strutted like a peacock, as if aware of his audience, and one of the technicians stopped by to watch. She suddenly recognized him and asked incredulously, “Is that the cat who was with us for so long? The one who couldn’t move?”

When the vet said yes, the technician dropped straight to the floor with Tweetie, fussing over him, petting him, and she kept saying how good he looked. Tweetie took the opportunity to offer up to her his silent meow and a meaningful glance at the closed door, but to his disgust, she did not cooperate with his covert demands. Instead, she turned to me to tell me how much better he looks now.

The vet admitted to me, for the first time, that he had had some doubts if Tweetie was going to make it. So had I. I had cried more than once, trying to come to peace with the idea of Tweetie being gone, but not able to do so. Not by a long shot.

And here he was, parading around the room with what the vet laughingly called his swagger, his little rump-shaking way of walking that he has adopted as he recovers, his hind legs swaying side to side like he’s wearing spurs and hip holsters. It suits him.

The vet said to me, “I think we can certainly call him a success story.”

Or we can call him what Gary does: a grumpy old turd.

No, wait! Something else that Gary calls Tweetie: a tough old cat!

I am endlessly trying to make sense of a world that has completely and unapologetically lost its mind.
View all posts by TheSmirkingCat →
This entry was posted in animals, love, Tweetie, vet. Bookmark the permalink.

7 Responses to Nine and a Half Lives