Posted on February 24, 2010 by TheSmirkingCat 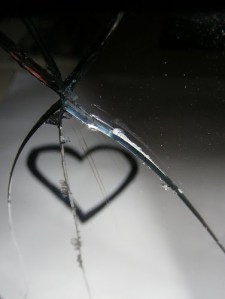 When Gary and I first attempted dating and establishing our relationship, our start was about as smooth as a porcupine wrapped in barbed wire. Both of us had just barely survived toxic partners, and both of us were still reeling from the battering and bruising we had taken during these ill-fated relationships. For every step closer we took, we ended up scaring ourselves and leaping back a dozen to protect our hearts.

We were spending a weekend together early in our relationship, and something rubbed us the wrong way. With the hair triggers we had developed, it truly didn’t take much back then. I became angry, and I have to admit to doing something childish and deliberately hurtful: I grabbed a letter I had written to Gary, a letter full of love and hope, a letter that had made him smile as he read it, and I tore it up into tiny pieces and viciously scattered the bits into the trash like those words had never mattered to me.

I don’t even remember what our fight was about. That was at least 3 years ago. I do remember eventually uncrossing our arms, making our way across the house to each other, and talking until our arms were finally around each other.

But what I remember most is later finding on Gary’s desk every last bit of that torn-up letter, carefully and meticulously taped back together. I was stunned. We are not talking a few haphazard yanks on the paper; when I tore it up, I meant business. I may as well have been shredding top-secret governmental information. The pieces of paper were tiny, and all Gary had to go by to put it all back together was my microscopic, barely legible handwriting on each sheet.

I don’t know why I am even thinking of that letter today. Maybe because I got to spend lunch with Gary today and didn’t really want to come back to work! Maybe because it still amazes me that, without a word, Gary fished out every last bit of that torn-up letter and put it back together like a puzzle.

Maybe because years later, I am still sorry I tore up that letter, but I will never forget how it felt to see that letter taped back up again, sitting on his desk. For every lie that is repeated about Gary, I know the truth. I know his heart. Others do too…they know him well enough to know he does not have it in him to return their hostile fire. His heart is already full of love for his kids, for me, his family (and a certain spoiled black cat), and there is no room left in it for the pettiness of those who only want to harm.

For the record…I meant every word in that letter, and I still do. And I promise not to tear it up again!

I am endlessly trying to make sense of a world that has completely and unapologetically lost its mind.
View all posts by TheSmirkingCat →
This entry was posted in Gary, love, love letter, relationships. Bookmark the permalink.