Posted on February 11, 2013 by TheSmirkingCat 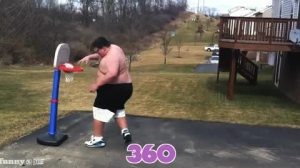 I swear I don’t go to Hickville (the inbred town the kids were dragged to years ago) simply to mock and ridicule the two-legged cattle that populate the area, but it is difficult not to.  Recently the kids’ church/cult-sponsored basketball teams started up, and it is every bit as disappointing and meaningless as the church/cult-sponsored soccer league.

Just like soccer, the kids are not learning anything at all about the sport.  They are subjected to endless Bible verses and preaching crammed down their throats at every opportunity, though, as well as senseless drivel about how Jesus would have played basketball (yes, seriously).

Bear’s coaches, Dumb and Dumber (Crow’s sugar daddy and husband-for-hire), are an incontinent old man with no knowledge of basketball who refers to referees as “umpires” and bears a shuddery resemblance to every child molester I’ve ever seen in the news, and an obese dufus who barely fits into his size 4X warm-up pants, has fat rolls on his head, for god’s sake, and wouldn’t know what to do with a basketball if it chased him down and bit his cellulite-ridden ass.  Who selects grossly inept individuals to serve as coaches for children?  Why choose people with no discernible skills, talent, or knowledge to impart?

Speaking of cellulite and asses, Crow is living a high school fantasy by manipulating girls barely out of preschool who don’t know any better than to accept her unfounded guidance in cheerleading, which, under Crow’s instruction, consists of randomly shaking cheap pom-poms, shrieking off-key as frequently as possible, and standing uselessly with a vacant expression, desperately looking around to see if anyone is bored enough to watch them.  The girls aren’t allowed to display any more athletic ability, effort, or ambition than their so-called coach does, so athletic feats are limited to bending an elbow to raise a plastic megaphone to one’s screaming mouth and applauding wildly for oneself.

Maybe Crow will share tips with the girls about how to never leave their parents’ house; where to get a crooked, white-trash hairdo; how to stalk the woman they wish they could be; how to find the best drive-throughs in town and binge-eat; or the secrets of tricking and bribing a desperate and hideous man into dating them, the only wells of knowledge Crow even has.

The kids live in a third-rate, bizarre environment where walking feces like Crow, her incestuous father/lover, and the fully sissified Uncle Fester are accepted as normal.  But hey, as long as it all happens in a church, and Crow and the Gang claim to be Christians, then there’s nothing to worry about, right?

I am endlessly trying to make sense of a world that has completely and unapologetically lost its mind.
View all posts by TheSmirkingCat →
This entry was posted in basketball, brainwashing kids, church crap, Hickville, pathetic assholes. Bookmark the permalink.

3 Responses to Umpires, Basketball, and Jesus