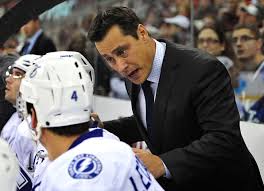 The hot potato game of who takes the blame for the Tampa Bay Lightning’s sub-performance for the past nine years has unfortunately landed square in the lap of head coach Guy Bouche, who was unceremoniously dumped from the team and fired over the weekend.

The Lightning have been dead in the water since 2004, floundering foolishly after a miraculous Stanley Cup win that, in my opinion, never would have happened without goalie Nikolai Khabibulin, who worked double and triple time to make up for the team’s massive shortcomings.  Whatever happened to that goalie, you may wonder?  Oh yeah.  The Lightning let him slip away too, and they have sucked tremendously ever since.

Over the past few deplorable and pitiful years, the Lighting have played musical chairs with team owners, general managers (now Steve Yzerman), and coaches, trying to hit upon the perfect change-up that will result in a change on the scoreboard.  Bouche seemed like he was it when he stormed into the season with more wins than the team has seen in years, finally leading the Lighting to play-offs and actually not losing within the first few games as in the past.

This season, the Lighting started strong, winning a streak of games that made me hopeful.  Then they fell into their customary rut, losing game after game, playing like they had no idea what a hockey stick is for, and a scapegoat was urgently needed.  Bouche’s neck was abruptly offered up and rather hastily hacked by Yzerman.

“…ultimately I am not satisfied with the direction we are heading and I believe making a change today is in the best interest of our franchise,” Yzerman stated in a press release on the team’s website.

I agree: a change is direly needed.

I disagree that change should have been Bouche.

Through the merry-go-round of changing owners, GM’s, and coaches, the common denominator has remained the players.  No matter what changes were made, the team played the same: win a few, then lose like hell.  Inconsistent, easily discouraged, poor defense, lack of drive, forcing the goalie to work overtime to defend the net from excessive time on that end of the rink.

A change is not effective when it is not addressing the root of the problem.  The players have largely remained the same since 2004, the Lecavalier-St. Louis clique that has not been effective in nearly nine years but stubbornly is kept on the ice like an aged trick pony show.  It’s not working, fellas.  Stamkos can’t carry the team.  Benching or booting a few faded-out superstars would  create more change that a revolving door of coaching staff.

Bouche is now serving as yet another Lightning scapegoat, sacrificed to hide the complacency and inadequacy of players who deserve nothing but massive pay cuts for the deficient, incompetent performance they have mustered up for the past few years.  The Lightning will continue to point fingers everywhere but at the ones wearing the jerseys, and they will remain at the bottom of the heap, little more than a joke in the NHL.

I’ve been watching the Lighting fall apart for years, and I have been following the team since well before the 2004 Stanley Cup year when wannabe hockey fans who didn’t know a face-off from a hat trick slithered out of the woodwork and hopped mindlessly onto the bandwagon.  I’ve remained watching long after the fickle, fair-weather, so-called fans trickled off in boredom as the team collapsed.  And I haven’t been watching with blinders on like GM Yzerman.

Hiring Guy Bouche was one positive decision made by this rotting franchise in the past decade.  Firing him was by far one of the worst.

I am endlessly trying to make sense of a world that has completely and unapologetically lost its mind.
View all posts by TheSmirkingCat →
This entry was posted in Guy Bouche, hockey, Lightning suck, NHL, Nikolai Khabibulin, Tampa Bay Lightning. Bookmark the permalink.

3 Responses to The Lightning’s Scapegoat