Posted on December 4, 2014 by TheSmirkingCat 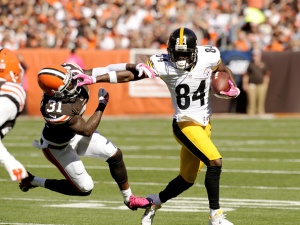 Hockey will always be my first love (go, Lightning!), but I have been having a pretty hot fling with football the past few years. My Steelers don’t always make this love affair a pleasant one, but I graciously won’t bring up the recent loss to the Saints.

One of my favorite moves in a football game is when the player with the ball stiff-arms an opponent.  (Kindly refer to the photo of Antonio Brown properly demonstrating a befitting stiff-arm.) Don’t ask me why, since most things that amuse or entertain me have no logical or rational explanation.  A good stiff-arm will leave me laughing so hard that I can’t breathe, panting for the replay so I can laugh again.

The other evening, Gary and I traveled to Hickville for Sunflower’s soccer game.  The other three kids were there too, and when Sunflower wasn’t on the field, she was right at Gary’s side, joking around and horse-playing with the rest of us.

A game the girls came up with was charging at Gary to jump into his arms and get picked up, a game that Bear, who recently turned 13, took great enjoyment out of foiling by dashing in front of them and ruining the launch.  After a few attempts, Sunflower looked frustrated, so I advised, “Try a stiff-arm.”

Perhaps I shouldn’t give football advice to a soccer player, or to a young lady already irritated with her brother.  She nodded, raised her elbow, and stabbed Bear dead in his side.

“A stiff-arm!”  Gary told her, quickly checking poor, gasping Bear for injuries.  “That wasn’t a stiff arm, it was just an elbow to the kidneys!”

I demonstrated a stiff-arm for her so she could see the difference.  No pointy elbows were involved in my rendition.

Bear, for the record, was intact, in one piece, not bleeding, and also no longer quite as willing to interfere in the girls’ game with their father. Wonder why?

I am endlessly trying to make sense of a world that has completely and unapologetically lost its mind.
View all posts by TheSmirkingCat →
This entry was posted in Uncategorized and tagged football, funny, kids, soccer. Bookmark the permalink.